Missoni is one of the leading and most distinctive fashion houses in the world. The Missoni style has evolved out of a long-standing collaboration between the husband and wife team of Ottavio and Rosita Missoni. In the late 1940s, Ottavio Missoni established a workshop producing jersey tracksuits that were sported by the Italian Athletic Team at the 1948 London Olympics, where Ottavio himself qualified for the final of the 400m hurdle race.

While in London he met Rosita Jelmini, the granddaughter of a family of shawl and ladieswear manufacturers from Varese, in northern Italy. After marrying in 1953 they began making items of knitwear in a small workshop in the basement of their first home in Gallarate before moving, in the late 1960s, to the company's present site in Sumirago with its magnificent views of the Monte Rosa mountains. Through the years, Ottavio and Rosita's path has been followed by their children Vittorio, Angela and Luca, who today continue to keep alive the spirit of the Missoni style all over the world.

The Missonis' designs were inspired both by the natural environment and by their own collection of art from Europe's Modernist era including the work of Tancredi, Sonia Delaunay, Giacomo Balla and Gino Severini, whose dynamic images of dancers reveal close parallels with the geometric patterns of Missoni fabrics. This is clearly illustrated in their designs for the catwalk - the exhibition included over twenty outfits spanning the first forty years of their fashion output - and their 'extra-curricular' creative activities such as Ottavio's works of collage and patchwork, examples of which were also on view.

The Futurists' belief that all aspects of life should be elevated from serving a merely functional role to being a vehicle for the highest artistic aspirations led to their increasing interest in clothing during the 1920s and '30s. This has clear resonances with the Missoni aesthetic and has led, in the words of fashion journalist Maria Pezzi (1979), to their creation of 'museum pieces that can nevertheless be worn'.

The exhibition was curated by Luca Missoni, and was accompanied by The Black and White of Colour, a thirty-minute documentary profile produced by Maggie Norden of the London College of Fashion, University of the Arts London.

Workshop Missoni: Daring to be Different in our shop 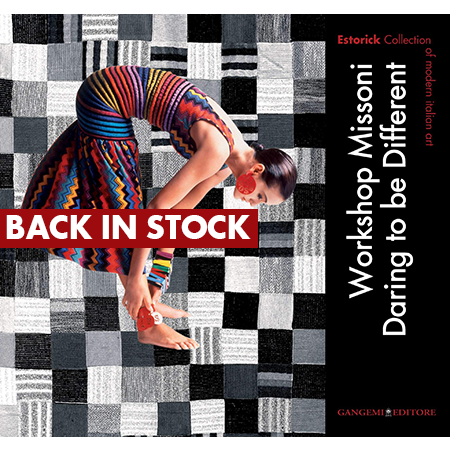 Workshop Missoni: Daring to be Different