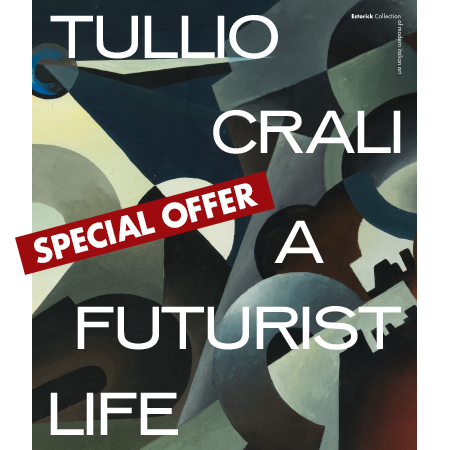 This catalogue is published to accompany the exhibition Tullio Crali: A Futurist Life.

For Tullio Crali (1910–2000) Italian Futurism was not so much a school of painting or poetry as an attitude to life itself. His powerful imagery reflected the movement’s unrestrained enthusiasm for the modern world, embracing technology and the machine as important sources of creative inspiration. Given its particular focus on “the immense visual and sensory drama of flight”, his work is most closely associated with the genre of aeropainting, which dominated Futurist research during the 1930s, yet Crali continued to explore the movement’s aesthetics throughout his life.

Featuring rarely seen works from the 1920s to the 1980s, drawn from the collection of the artist’s family, this catalogue explores every phase of Crali’s remarkably coherent career, including iconic aeropaintings, works of experimental poetry, mixed-media compositions and examples of ‘cosmic’ imagery dating from the 1960s, inspired by advances in space exploration. Also featured are a number of Crali’s famous Sassintesi – enigmatic constellations of stone and rock arranged by the artist but ‘sculpted’ by natural forces and processes – as well as translations of his most important theoretical statements.

The catalogue includes all the works featured in the exhibition and essays from curators Christopher Adams and Barbara Martorelli.