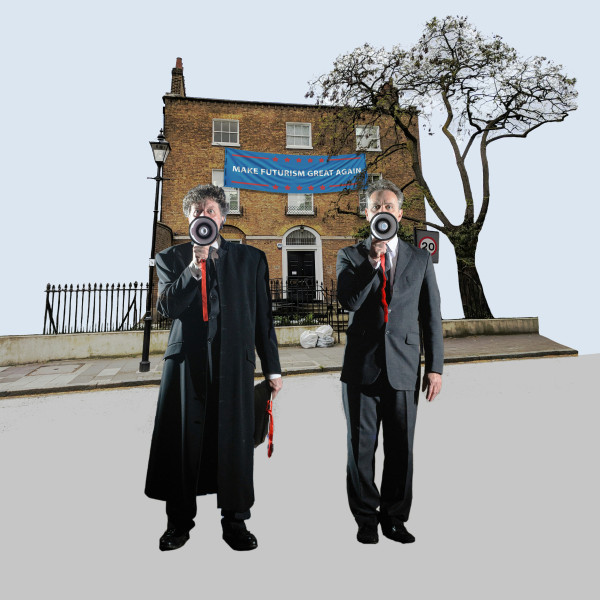 Today sees the launch of Make Futurism Great Again a timely examination of Futurism in the 21st century by groundbreaking artist group Neo Futurist Collective . The launch is accompanied by a specially filmed performance of “CarTet for Car horns, Engines and Radios”.

After an initial Instagram take over on 20 February 2018, the artists will, over the coming weeks and months, release images, sounds, text and films on social media, in celebration of their 10 years of activities

Over the summer and autumn, a series of events will run alongside a display in the permanent collection galleries of the Estorick Collection, featuring special commissions related to the themes of the Manifesto of Neo-Futurism, launched by the Collective a decade ago, on the 99th anniversary of the publication of The Founding of Futurism manifesto by FT Marinetti.

The project will include

“What is the future for Futurism in an age of ecological apocalypse, the continuing fallout of global financial meltdown and the start of a new Cold War that has cyber terrorism and fake news as its main weapons? Can Art Save the World?”

The intervention Make Futurism Great Again will explore the legacy of Italian Futurism in the 21st century by pairing the Neo Futurist Collective archive with the permanent collection of the Estorick Collection.

#MFGA will feature material from the Collective’s archive and new commissions created to celebrate and extend the legacy of the Futurist Movement.
Exhibition preview will include performances by the artists.

Speak Up!
A recorded manifesto co-created with the community of Highbury and Islington.

In partnership with the Estorick Collection’s education department it will feature participants from local community groups and in a series of informal drop-in workshops.

By looking at moments of everyday protest, artist and conceptual politician Giuseppe Marinetti will realise a two-channel sound collage utilising material gathered from community workshops, alongside as a series of revolutionary banners produced during the workshops to “occupy” the museum space.
The banners and sound collages will be brought together and exhibited for a special Preview Day for participants.

A Family Day at the Estorick Collection exploring sound making, listening, manifesto writing and creating banners. The drop in workshop will be delivered by Neo Futurist artists and will culminate in a performance salon, showing off the work produced during the day.

Free Entry Day
22 September 2018
For one day only, we are offering free entry to anyone wishing to visit Make Futurism Great Again in the permanent collection rooms.

#ArtIsEverywhereMW... even when working from home! This video was originally posted on 30 April 2020 to celebrate the anniversary of the birth of Futurist artist Luigi Russolo in 1885. In his honour we created some noise! #MuseumWeek @MuseumWeek

Our exhibition Italian Threads: MITA Textile Design 1926-1976 will end on 20 June, don't miss it, this is your last chance to see the colourful MITA designs! Info&Bookings: bit.ly/3i4TbJI
See more...